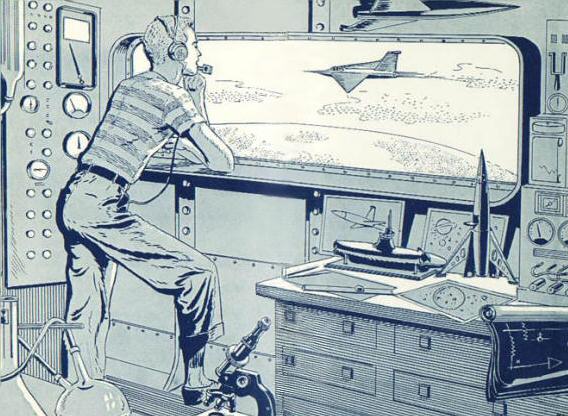 I don’t remember reading much before I was probably 6 or 7 years old. I’m sure I had to read for school, but I just don’t remember doing it for fun. However, sometime around that age, I discovered the Hardy Boys, and I’ve been a voracious reader ever since. The adventure and mystery that the books conveyed enthralled me, despite what proved to be pretty terrible writing in retrospect. I remember following my parents around grocery and department stores with my nose in a book, and earning tons of free personal pan pizzas from Pizza Hut through their Book It! program.

However, the Hardy Boys didn’t have a huge impact on my life outside of pure entertainment. Yes, my friends and I started detective agencies to solve crimes and mysteries (“The Case of the Missing Hairbrush!”), but I didn’t grow up wanting to be a private detective or anything.

Then I discovered the Tom Swift, Jr. series. Written in the same breathless, overly-adverbed, gratuitously exclamation-pointed style as the Hardy Boys (“The flames are getting too close to the rocket!”, Tom cried breathlessly!), the series was written from 1954 – 1971 and detailed the adventures of 18-year-old boy genius inventor Tom and his all-American chums. Reading them now is pure comic delight, but at the time, they drew me into a world where technology made anything possible. Despite being only 18, Tom had virtually endless resources at his disposal, thanks to his father’s ownership of Swift Enterprises, a multi-national conglomerate. Tom routinely built submarines, cars, rockets, time machines, and other devices that would be groundbreaking today, let alone five decades ago. Travel to the deepest parts of the ocean and the outer reaches of the solar system was all in a day’s work for Tom.

It seems silly now, due largely to the horrible quality of the writing and the near-total disconnect from scientific realities, but the series had a profound impact on my interests and goals for life. Much of my love for technology and business can both be traced back to my love of this book series. Tom’s multidisciplinary approach to solving problems with science and technology inspired me, and the idea of having a large conglomerate that dabbles in many areas of technology still interests me to this day. The fact that people like Elon Musk are actually doing it encourages me.

Anyway, just thought it was interesting how much it impacted me. We talk a lot about being careful what our kids watch on TV, and I think that’s a good thing. But we should also consider carefully what they read and the future impact it might have.

PS – If you enjoyed the Tom Swift, Jr. books, you should check out the Rick Brant series. It was written around the same time, but the science is more realistic and the writing is much better.