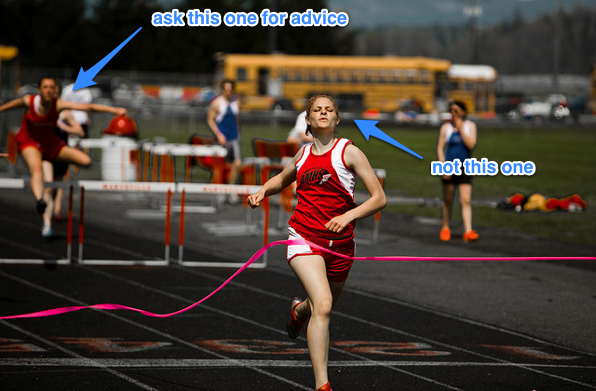 There are some side effects of always blogging about your life and your efforts to improve it. Some good, some bad. For instance, I feel like I’m becoming that guy who is always trying some weird lifehack. I’m not quite to Tim Ferris status yet in terms of bizarre behavior for the sake of improvement, but give me a few years.

On the other hand, people are often nice enough to humor me and ask for advice. A friend recently told someone that I could offer some helpful thoughts on developing self-discipline and habits. Afterward, my wife half-jokingly complained that because she isn’t constantly promoting herself, no one really asks her for similar advice, despite the fact that she’s 10x as disciplined as me.

I think the “10x as disciplined” part was the half where she was joking, but I can’t be sure. Regardless, it got me thinking: do people just ask me for advice because I blog about stuff like this? And should I just refer their questions on to someone like my wife?

After some reflection, I don’t think so. While it’s undeniable that my wife is more disciplined, she paradoxically doesn’t have any advice to share. Alexis doesn’t think about how to be self-disciplined, she just is. She’s one of those people who offer the annoying “just do it” advice, because that’s just how she is.

Meanwhile, while I’m not where she is (yet), I’ve spent the last few years working very hard at improving, and it’s working. I have the data to prove it. I’ve drastically improved a number of areas in my life and I fully expect those trends to continue.

Imagine two athletes. The first has been considered a prodigy since birth, the best in the world, the very pinnacle of their field. They were made for the game and it’s easy to see.

Now, you want to become a great athlete and you can ask either of these guys for advice. You ask the first guy, right?

Most of us would, but I wonder if that’s the wise move.

In other words, if you want to be faster or stronger, don’t ask the one who has always been the fastest or the strongest; they were probably born that way.

Ask the one who has improved the most.

The most important thing is that you’re faster and stronger and better than you were yesterday. And the person who can teach you how to do that day-in and day-out for a lifetime isn’t someone who was born great, but someone who became great.