The price of anything is the amount of life you exchange for it. — Henry David Thoreau

I know, a clickbait headline. I must be exaggerating, right?

Unfortunately, I’m not. If you work for yourself for two or three decades and don’t follow this advice, you could be leaving $100,000 or more per year on the table.

That’s already millions of dollars lost, ignoring the effects of cumulative growth in your income, investment returns, better quality of life, and not having to give up freelance and get a job because you can’t make ends meet.

Making this mistake can absolutely be the difference between barely surviving as a freelancer (or not), and thriving as a successful solo consultant.

Learning this lesson changed me overnight from a freelancer to a consultant, and from this being a temporary stepping stone in my mind to something that I could envision myself doing for the rest of my life.

So what’s this big mistake?

It can be overwhelming to even know where to start, what applies to you, and what will make the biggest difference.

The #1 thing you can do right now to start growing your freelance or consulting practice dramatically:

If you’re charging hourly prices for the work you’re doing for clients, you’re putting a cap on your earnings, you’re doing your clients a disservice, and you’re building the wrong kind of career.

In this article, I’m going to lay out a list of reasons why charging hourly is terrible for you and your clients, provide a path forward from hourly billing, and answer some common objections I hear to this freelance rate advice.

Why hourly billing is unfair to everyone involved

I’ll cover why hourly billing is unfair to you in just a minute, but first I want to tell you why it’s not fair to your clients.

It focuses you and your client on the wrong thing

When you bill hourly, you are putting yourself in a position where you are incentivized to take as long as possible to deliver the results that your client is trying to buy.

I know what you’re thinking:

“I would never intentionally drag out a project just so I can make more!“

And I’m sure that’s true.

But when you’re incentivized to take as long as possible, you also probably won’t be searching diligently for ways to deliver those results in a fraction of the time either.

After all, why would you spend any time or energy trying to figure out how you could fulfill this contract in half the time, thereby cutting your pay in half?

So it’s not so much that you will intentionally ignore ways to optimize the process, but that you won’t be harnessing your mind in that direction.

In practice, this means things like optimizing your processes, subcontracting, automation, and just working faster and more productively because you will be capturing the fruit of those gains.

Wouldn’t it be better for your clients if you were incentivized to constantly be looking to deliver the results they’re trying to buy even faster and more efficiently?

Hourly billing focuses you and your client on the inputs of the work you’re doing for them, not the outputs.

The best thing you can do for your clients is become fully focused on the results you deliver for them, not how many hours you’ve worked.

This is the most important thing you can learn as a solo consultant or freelancer:

Billing hourly is literally you selling an hour of your life to a client.

But no client in the world wants an hour of your life. They want to buy the output that they hope you’re going to produce with that hour. They don’t really care how long it takes, because the result is what they’re after.

So why not just sell them that result?

This story about Henry Ford and brilliant engineer Charles Steinmetz perfectly illustrates what I’m getting at:

Ford, whose electrical engineers couldn’t solve some problems they were having with a gigantic generator, called Steinmetz in to the plant. Upon arriving, Steinmetz rejected all assistance and asked only for a notebook, pencil and cot. According to Scott, Steinmetz listened to the generator and scribbled computations on the notepad for two straight days and nights. On the second night, he asked for a ladder, climbed up the generator and made a chalk mark on its side. Then he told Ford’s skeptical engineers to remove a plate at the mark and replace sixteen windings from the field coil. They did, and the generator performed to perfection.

Henry Ford was thrilled until he got an invoice from General Electric in the amount of $10,000. Ford acknowledged Steinmetz’s success but balked at the figure. He asked for an itemized bill.

Your clients want to buy results. So sell them results!

Here are two other things they want:

They like to know what they’re paying. As a result, clients aren’t satisfied with an hourly freelance rate alone. They also want an upfront estimate on the number of hours.

So now there’s a ceiling. And you’re not going to be able to go way over those hours without some kind of fallout.

You now have the worst of both worlds, because you’re taking the risks for both sides of this transaction. 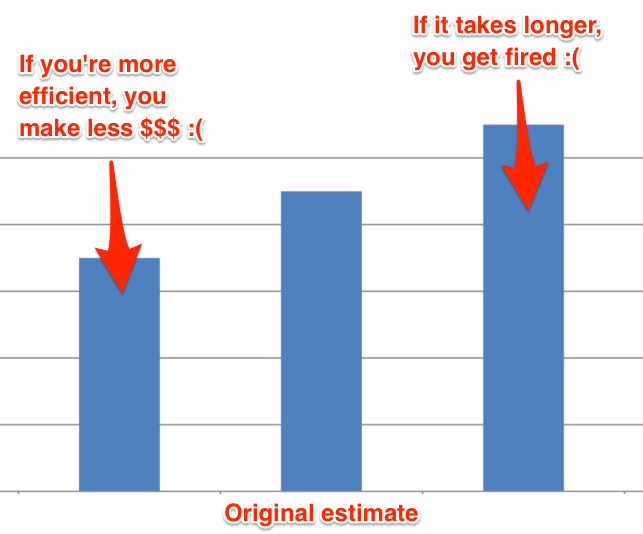 If it takes you twice as long as your estimate, the client will push back, perhaps demand a refund, fire you, etc.

But if it takes you half the time that you estimated, the client will expect to only pay half.

That’s a lose-lose proposition for you.

If you do it right, you can definitely make more money by not billing hourly, so that’s obviously better for you.

But check it out:

It’s often better for your clients if you don’t charge an hourly freelance rate.

Talk to anyone who hires freelancers regularly and they’ll tell you how unreliable freelancers can be, and how frustrating it is working with them, trying to get things done on time, etc.

Now, are all those flaky freelancers just bad people?

No! Mostly they’re just doing the best they can, scraping by, working way too much, making way too little, and hoping things get better.

And sometimes they reach the breaking point and disappear.

Not the right way to go about it, of course, but if they were making more money, their situation would be lower stress and more sustainable.

Hourly billing positions you as a commodity

You don’t want to be a commodity, easily compared and weighed against the other alternatives (also charging “market hourly rates”).

You want to be a monopoly.

You ideally want clients to see you as the only possible solver of their problem.

Hourly billing works against that, because it distills your entire package of expertise, value, and approach down to a single number to be compared with other freelancers.

What to do instead

Ok, so if you’re not going to charge hourly, how should you bill?

That depends on the type of work you’re doing.

There’s a more detailed breakdown of each pricing model (and some mistakes to avoid) available as a free bonus download for this article.

Look, I know this is difficult.

The big advantage that hourly billing has going for it:

I get that. And maybe you’ve tried some of this before with bad results. But I’m telling you, it’s worth trying to figure it out. I did a pricing webinar recently where I covered all this in more detail; the free bonus download has that recording.

But that doesn’t mean it’s easy. Pricing is an art form and a skill just like design, coding, or writing. You’ll have to practice a little bit to get the hang of it for your own situation, but I promise that it’ll pay off if you stick with it.

I just got an email from a freelancer who landed a project from a new client. He was emailing because he had taken my advice to experiment with value-based pricing, and instead of selling the client a murky arrangement where he’d work at an hourly rate (neither of them knowing where things would land, and both of them taking on a lot of risk), he sold a flat rate project at $7500.

But check this out:

The freelancer estimates that because of the skill he’s built up and new improvements he can put in place, it’ll only take him 18 – 20 hours to do this project.

Even if he’s off by a factor of 2x, that’s still around a $200 / hr effective hourly rate, and multiples above what he was able to charge when he was just doing hourly.

So please, please, do yourself a favor:

Don’t forget to grab the bonus download pack for this article, which contains: