A reader named Jorge sent me this question, which I’ve tweaked for clarity:

I have a question: how do I get those first few clients when I don’t live in the country I want to target?

I live in Colombia, a Spanish speaking country in South America and I don’t really want to do consulting work here because I feel like I don’t fit the culture.

My wife and I are applying to migrate to Canada this year, so the plan is to finally move there in 2017. For that reason I decided to brand and promote myself in English to US & Canada clients.

So how can I target US & Canada clients? I’ve tried joining FB groups for small business owners but those are just filled with spam!

Your question is a good one, and one I personally haven’t had to face, but I have thought about how I might handle it if I was to move abroad for an extended period.

I do think that the most lucrative freelance projects tend to be in North America and Europe (though not always!), so I’d really want to try and get into those markets if I could.

I think the key point that I want to make is that your situation isn’t actually different in nature from that of other freelancers, only of degree.

Clients want it all

See, clients would always prefer to hire someone who does all of the below:

However, they obviously can’t get all these things, so they set out to find someone who checks enough of the boxes that they can justify hiring them.

But in any case, the most important item on the list is the first one:

A client will only hire you if they believe your work will solve the problem they have.

The “believe” part there is important too. That’s where the low-risk stuff factors in. It’s not enough for you to be able to solve the problem, or even enough for the client to think you can. They have to believe you will solve their problem.

Find your own mix

You need to decide how you’re going to make the case on what boxes you check and how that solves your client’s needs.

The most important thing I can stress here is that you should start trying to arrange yourself to be a “not-cheap high-quality solver of a specific type of expensive problems”. In other words, you may have to compete on price or availability or something in the very short run, but in the long run, you want to compete by having a specific set of skills, so that people looking for that set of skills say: “Finally! Someone who gets it!” 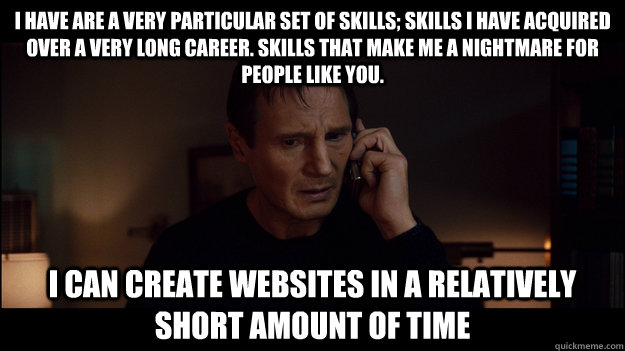 No matter where they are, all freelancers have some kind of handicap that they’re fighting against. We all have to find our “unfair advantage” to compete and win projects. Most overseas developers try and compete by charging very low prices, but that’s the lazy way. You should compete by picking a specific niche and being the best person in the world for that niche.

On bilingual dentists in Texas

To take an extreme example, let’s say that you build WordPress websites. Great, you’re one in a million. Good luck getting hired.

But two of your clients have been dentists. Who serve a Spanish speaking population. In Texas. Further, the thing they loved most about the service you provided was how you helped them get new patients in the door.

So now you decide that you don’t build websites. Instead, you provide Texas-based dentists with bilingual websites that bring in new customers. That’s your niche. And you can own that niche.

It doesn’t matter where you are in the world, because your clients are going to end up choosing between:

Now, I don’t know if you need to go that niche. But the point is, you need to niche down to the point where you can find clients who will hire you at almost any price, no matter where in the world you are, because they need something that they think only you can provide.

I think most of what you’d be fighting against is pretty irrational, honestly. I really think it comes down to:

On #2, I have frequently worked for clients in the same city, but never met them. But I know they hired me partly because I was there. I think it just makes people feel more comfortable.

The main point though, is that these are factors, but they’re not deciding factors, or they don’t have to be. It may be harder for you to get hired than if you were in the US, and you may have to temporarily accept lower rates, but it doesn’t have to be a death knell.

I think the most effective thing you can do is make yourself stand out in some way that makes it clear you’re not just another faceless overseas freelancer like a client can find on Upwork.

The ultimate reason North American clients won’t hire you is that they see you as a risky commodity. You’re a far-off cog in a machine, and they don’t know how to judge your quality, manage your work, etc. You need to figure out how to position yourself as a solver of a very specific type of problem.

The above takes time, I get that. So these are some other easier approaches you could take in the short-run:

But in the long run, the key thing I want you to think about is positioning:

How can you position yourself so that people who need your services feel like you’re the only person in the world who can solve their problem?

If you can do that, it doesn’t matter where in the world you live, because those people won’t be satisfied with anyone else.

I highly recommend Philip Morgan’s Positioning Manual for Technical Firms for more detail on that. He has a lot of great online writing and podcast appearances on the subject as well.

It’s not hopeless! I myself have hired lots of overseas freelancers over the years and have paid tens of thousands of dollars to. I could care less where in the world they live as long as they tick the boxes in a way that makes sense for my needs and the problems I need to solve.